Soldiers who serve in the internal troops of the Ministry of Interior Affairs (MIA) are surrendering en mass to the Euromaidan activists, the Ukrainian News reports. 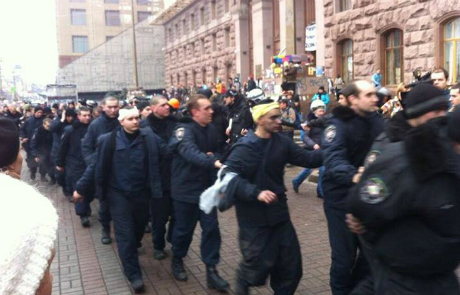 Currently, about 100 prisoners were taken from behind the barricades at the October Palace. The protesters are trying to refrain from beating them. The prisoners are being escorted to the tent labeled „the commandant’s office in Kyiv.”

Currently, the protesters have driven all security forces from Independence Square (Maidan) and from the barricades on Instytutska Street. The surrendered are only ordinary soldiers. Officers have not been observed.